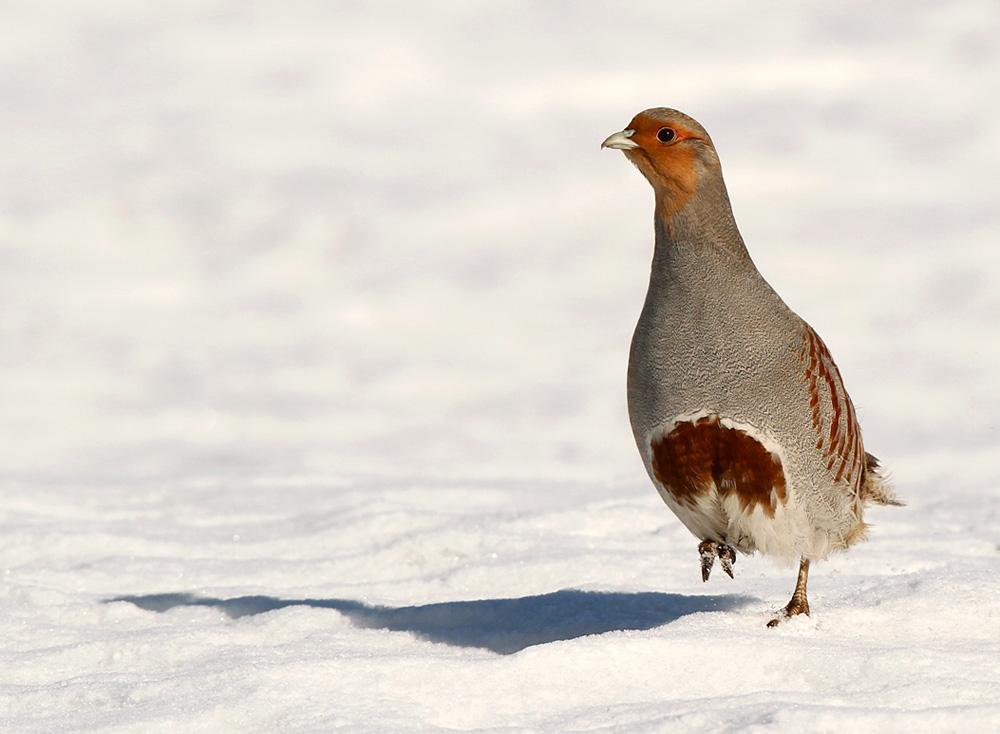 Adults: tawny ocher heads separated from the brown crown by a gray border; brownish gray dorsal part and tail; brown wings; whitish gray neck and breast with feathers fringed with dark brown; off-white colour at the level of the belly, slightly spotted with brown in females, crescent of the same color in males; flanks turn to pale brown with ocher-brown stripes in one direction and whitish in the other; greenish beak; brown eye; grayish legs. 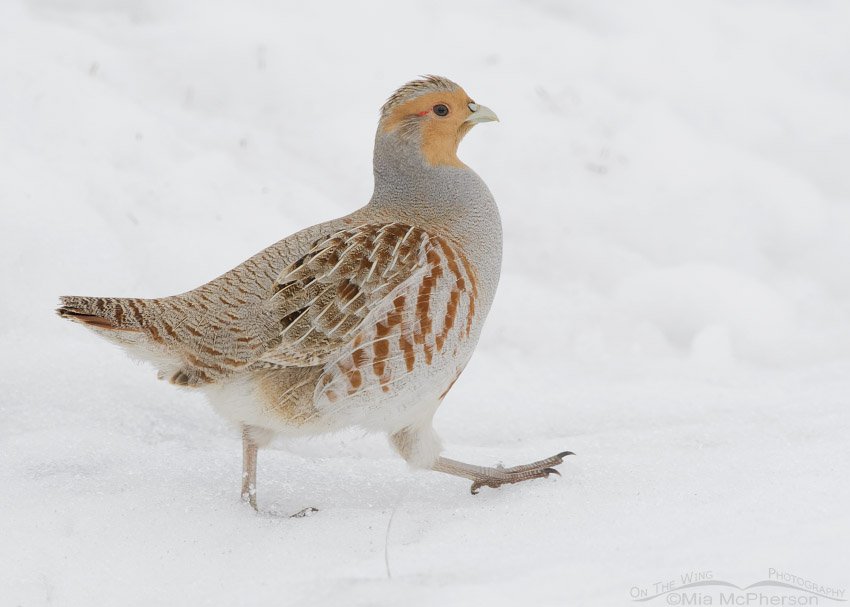 The body takes the full round shape and firmly planted on the two sturdy legs, the neck curled up or erect depending on the situation and the behaviour, the tail short, conical and drawn back to the ground, the gray partridge resembles to an enormous quail. Always alert, quick and ready to disappear at the slightest alarm or to nestle between two clods of earth, it is also to its protective livery that the bird often owes its salvation. Modest, certainly, as seen from afar, but rich in subtle gradations of colours, earthy brown on the dorsal part of the body, ashy-gray on the neck and chest, the head takes the color of dead leaves, and the upper belly marked with a “horse print” for the males only, its plumage harmonizes perfectly with the thousand shades of plowing, fields and stubbles. Caught off guard or pushed into its last entrenchments, the gray partridge soars noisily; the gray partridge likes semi-open areas, these countryside landscapes where fields of various crops are closely intertwined, separated by “bridges” of grass. Wild and bramble, and crisscrossed by a network of hedges. The edges of groves and small woods are also popular as a lodge and refuge. It is with a harsh, hoarse and resounding voice that the male signals his presence, the flight being the occasion to utter a cackled sound of fear.

Food: The gray partridge feeds on seeds, in particular on what humans agreed to call them so-called “weed” that have been destroyed with a lot of pesticides. It also consumes cereals  left on the ground after harvest season, and on shoots and buds. In the spring, the worms and insects are important complement, say capital, for the them and for the newly born birds. 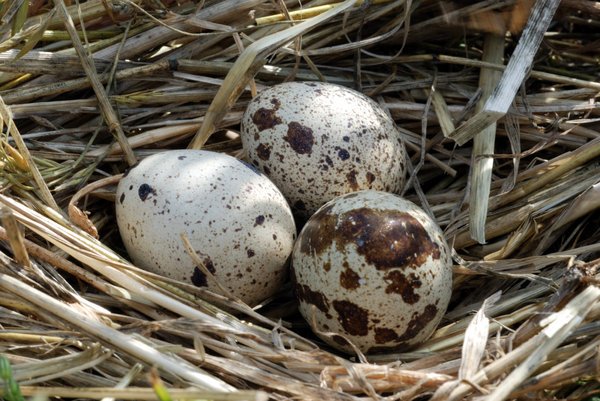 With the announcement of the coming sunny days in February or March, the winter groups are breaking up. The reproductive instinct is awakened, materialized by numerous chases and aggressive spat (hassle). As soon as the couple is formed, the two partners isolate themselves. The female, who chooses the site, then scratches a thin bowl, which she pads with herbs and dry leaves. Well camouflaged under the vegetation, this nest also has an access corridor that the mother uses scrupulously during her rare daily outings. The laying takes place in the second half of May and consists of 10 to 20 eggs. They have Greenish to olive brown colour. Medium size of the egg: 27 x 36 mm (1 x 1.50 inches); weight: 13 g. the 25 days of incubation are ensured by the female while the male watches around. A few hours after the last chicks hatch, the whole family moves away under the guidance of the two adults and begins to feast on insects.

Very faithful to their local lands, gray partridges lead a very homey family life. Adult and young partridges hardly leave each other, the small company, which can also accept a few other isolated birds, spending the bad season in the summer territory.

The Gray Partridge breeds in Europe from northern Spain to Finland, and from Ireland to the Caspian Sea. It also nests in Turkey, while 2 other subspecies are found as far away as the Baraba steppe.

We hope that this article helped you to get a better understanding of birds. For more articles retated to  Ornithology in specific or animals in general please visit our Animal Category.