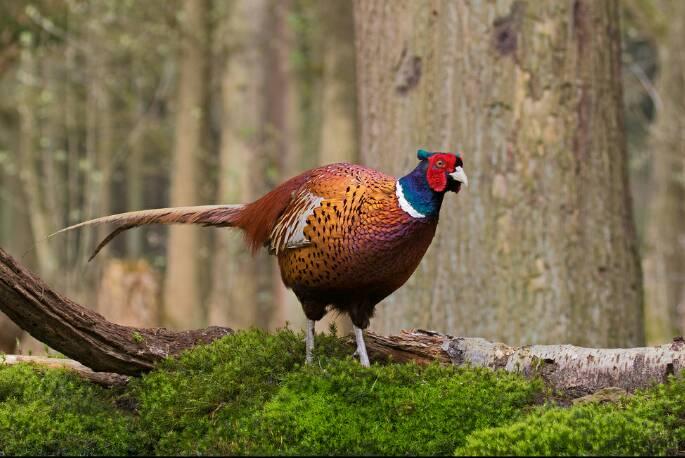 The Ring Necked Pheasant is known in Ornithology as Phasianus colchicus. This study will cover all the necessary parts of Ornithology in order to have a better view concerning this bird.

As already noticed from the picture above, the male of the Ring-Necked Pheasant has green head and neck with oily tints; red large upper border around the eyes, red scarlet cheeks; reddish brown covering the dorsal part of the bird. By looking to the picture we can see brown wings; rusty ocher throat and chest; ocher-yellow sides; black brownish belly; reddish brown tail with different variation between the male birds. Furthermore in our observation, there are numerous feathers tipped with black on the back and the dorsal part; tail barred with black colour; pale greenish beak; yellow eyes; grayish legs.

The female is entirely spotted and nuanced with yellowish-brown, the body gets paler and more uniform colour in the abdominal part.

Furthermore to this study, these kind of world birds are originally from Georgia, introduced to Italy by the returning of the Roman soldiers, the Ring-necked Pheasant is now represented throughout temperate Europe. Often observed at the bend of a path, or on the side of a road, abundant thanks to the birds regularly released for hunting through centuries, and thanks also to its ability to subsist and proliferate in the wilderness independently of man, it is now an integral part of our wildlife.

If the alert makes the bird uprights the neck, the Ring-necked Pheasant would rather stay still, flatten out in a furrow, or run away rather than fly in the open sky to be seen. Sort of confused and forced, it takes off at the very last moment, vertically or almost, with a surprising crash of wings and panicked sounds. Its flight is direct and swift, but despite the frantic flapping of its short, broad and rounded wings, it hardly manages to climb or cover long distances.

Thickets, copses (woods), edges, wasteland and thick hedges surrounding a variety of crops, light and medium-sized undergrowth, groves surrounded by plowing, if possible near water, all these areas constitute the preferred habitat of the Ring-necked Pheasant.

During good days, in the spring, advancing in the grass, the rooster affirms its presence with resounding and scratchy sound. In case of panic, the birds let out a sonorous frightened sound.

It is on land that the Ring-necked Pheasant searches and grabs its food, which consists mainly of various seeds. Small wild fruits are also on the menu, as are insects and other invertebrates, and even larger animals, such as frogs and small rodents. 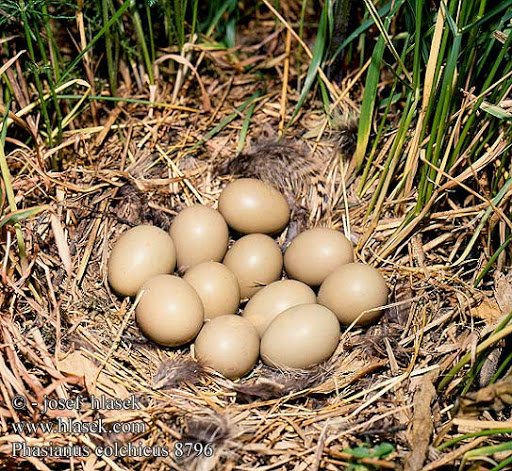 By the approaching of February or at the latest in March, the winter groups break up and each regains its independence. The roosters mate with one or more hens depending on the relative importance of the two sexes. Then the female isolates herself and hides the brood in the shelter of a bramble tree, a fern bed or any other natural shelter.

The nest is a simple bowl scraped into the ground and lined with fallen dry leaves and twigs. The female in May lay 8 to 12 eggs. The eggs take Shiny green to oily brown. Medium size of the egg: 36 x 45 mm (1.41 x 1.77 inches). The weight of the egg can reach 30 g. As it is worthy to say that the 23 days of incubation are carried out by the female alone.

The young birds leave the nest a few hours after hatching. They fly at the age of a dozen days after the hatching but stay with their mother for up to 3 months.

In winter, after the massacre of the first days of hunting, the remaining survivors tend to form small groups, but remain confined.

The Ring-necked Pheasant, with multiple subspecies, breeds from northern Spain and north Africa to southern Sweden, then from Ireland to the Caucasus and to China.

We hope that this article helped you to get a better understanding of birds. For more articles retated to  Ornithology in specific or animals in general please visit our Animal Category.